What’s the difference between a dry-ice, heavy-fog, smoke machine, faze machine and a haze machine?

They all produce ‘smoke’ don’t they, so aren’t they all the same just with different names?

How is a haze machine different to a smoke machine? What's the difference between water based and oil based haze fluids?

Will a smoke machine or a haze machine set-off a fire alarm?

These are questions we are regularly asked so we’ve produced this guide to the differences between the different types of ‘atmospheric’ machines, a basic overview as to their operation and likely features and their pros and cons.

Smoke machines work by heating a fluid, usually a water and glycol based fluid, which rapidly expands and is then forced out of the nozzle of the machine as a jet of ‘smoke’. The vapour produced is warm and with high humidity, and mixing this with the cooler and less humid air in the room produces the smoke / fog.

There are a massive range and capability of smoke machines now on the market, from simple units costing as little as $30 to touring capable units costing several thousand dollars.

Whilst the core function of these machines is often very similar, spending more will often provide additional features along with higher ‘duty cycles’ (the time the machine can be used constantly / or minutes without ‘resting’).

Differences and additional features of cheaper to more expensive machines may include: 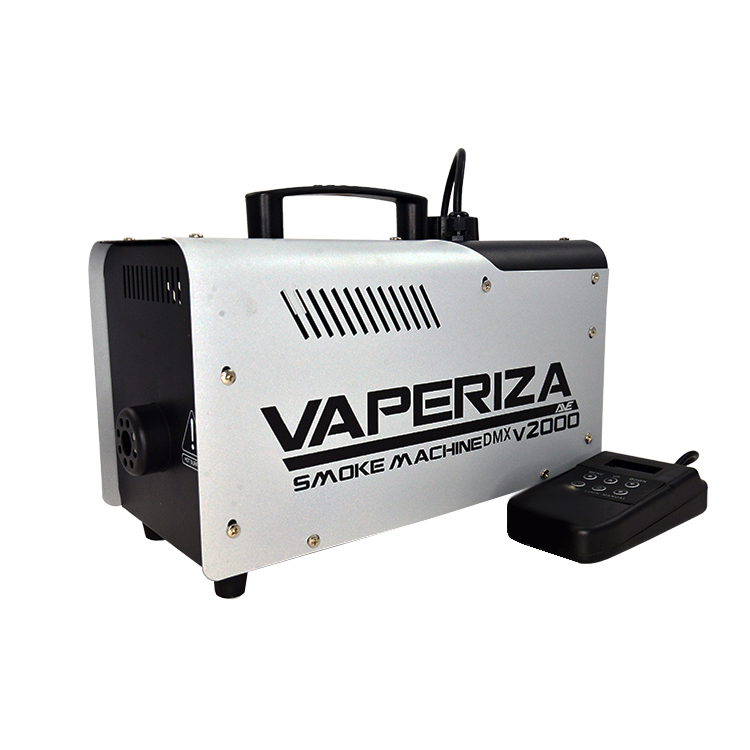 Faze machines are hybrids somewhere between smoke and haze machines in operation and capability.

A faze machine is a fundamentally simply a smoke machine with an added fan unit.

Depending on the price and quality of the machine, there may also be additional control (via remote or DMX) of smoke volume output and fan speed. This variability of output level combined with the fan can allow for lower volumes of smoke to be spread more evenly around larger rooms, stages or venues and hence more closely replicate the type of spread and density that can be produced by true faze machines.

That said, the smoke is still produced through a heating process, and particle sizes and ‘hang times’ will still not compete with that produced by true faze machines, and also the fluid consumption of faze machines also typically remains much higher than that of true haze machines.

So we would summarise faze machines as a great all-round atmospheric device, with the fundamental features and benefits of a smoke machine, but with the ability to fine-tune outputs and volumes without the inherent expense of a true haze machine. 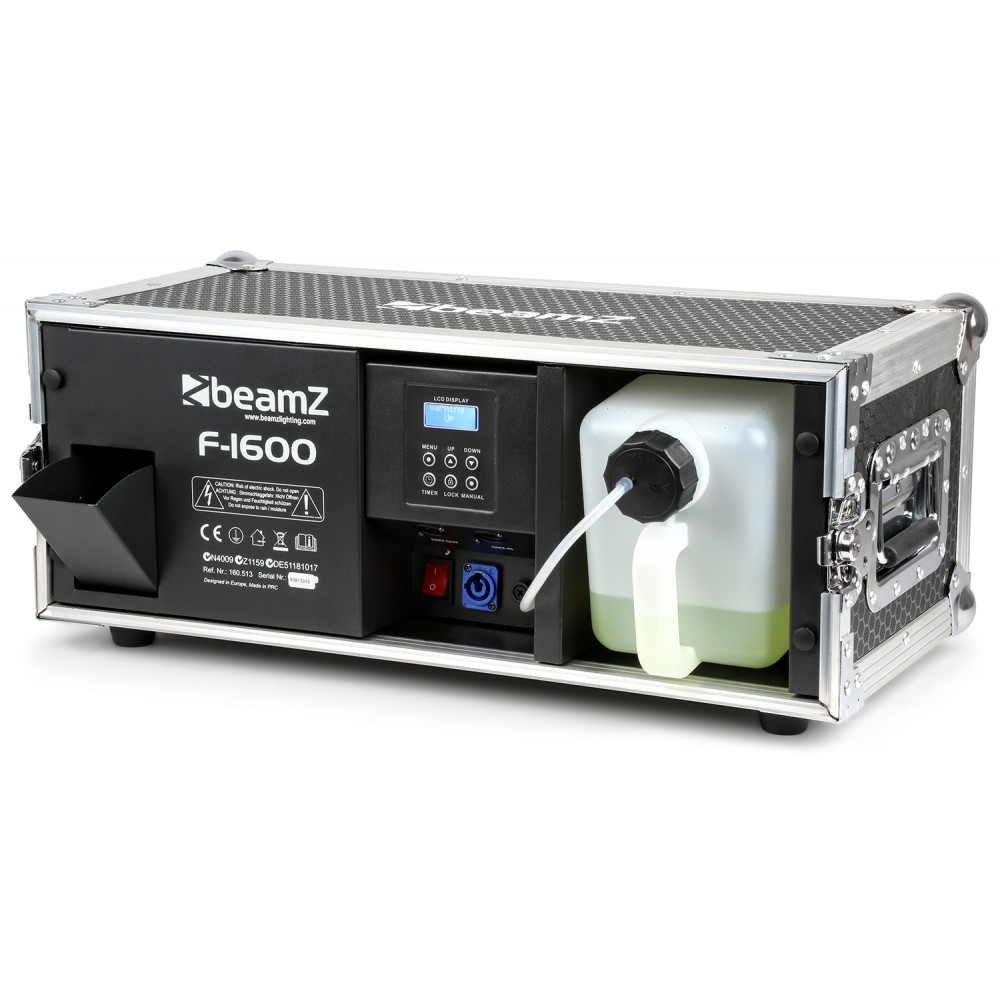 Haze machines are often the ‘go to’ for larger events, theatre, ballet, and concert use and for good reason given that even mid-range machines have the ability to continuously run for many hours, and the underlying process used to create the haze results in much ‘finer’ mists, often with significantly longer hang-times and with an improved ability to highlight light beams at a higher level of translucency versus smoke machines.

Haze machines operate not through heating a fluid, but rather by atomising a fluid through compression of the fluid through a fine nozzle / nozzles (much like advanced diesel engines can atomise fuel at super-high pressures producing a fine mist of fuel and air which improves ignition and efficiency).

This fine mist is comprised of significantly smaller particle sizes versus smoke, and is produced without the use of heat, thus arguably producing ‘cleaner’ fogs (may find this assumption however to be objective given that haze compounds are still not entirely ‘pure’!) The fluid is forced through the nozzle or nozzles of the machine using high pressure compressor units and hence the machines also run cool versus smoke machines. It should however be noted that the compressors in many haze machines are not entirely silent, and care may need to be taken as to their position and noise suppression when used in quieter performances, theatre or ballet use.

Haze fluids are also available in both water and oil based formulas. Much like smoke / fog machine fluid, water based haze fluids are made of a water / glycol mix. Oil based hazes are different however in that they are made from a mineral oil base, and hence whilst many modern haze machines can run with both fluid types, we would advise that fluid compatibility is carefully checked.

Both types of fluid will produce a broadly similar effect, however there are some subtle differences. Oil based haze tends to have a longer hang-time and dissipate more slowly, but may also have a higher probability of triggering fire alarm sensors which include specialist hydro-carbon sensors.

Water based hazes are conversely lighter, with reduced hang-times, and tend to dissipate a little faster producing a slightly more ‘cloud like’ effect as they are also influenced to a higher degree by air currents within a venue.

Haze overall is much less likely to trigger fire detection systems versus smoke machines, however many factors come into play here, and there is no guarantee that haze will not trigger building or venue alarm systems. 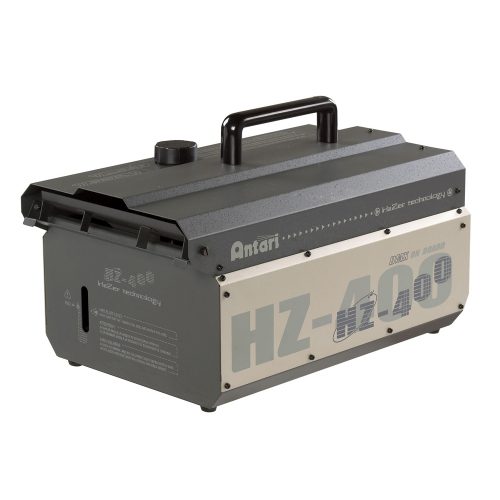 Our Antari HZ-400 high output faze machine. Robust construction and super-economical. Will happily run for 12 hours on a single tank of fluid and effectively fill medium to larger venues. Find out more here.

Dry-ice machines create the classic low-lying ‘cloud’ effect where the fog hugs the floor, and cascades off the edge of the stage, down stairs etc.

Dry-ice evokes a mystical and magical quality quite unlike any other of the atmospheric effects. It will naturally seek to drop to a lower level, hence creating movement, and will swirl and twist around the feet of performers or guests on the dancefloor. It can also be perfect to create a ‘floating on clouds’ effect which is often requested for the first wedding dance or in ballet productions.

The fog in this case is usually created by dropping the dry ice – which is solid carbon dioxide which in its solid state will be at a temperature of -78.5 degrees Celsius – into a container of warm water.

The contact with the warm water causes the solidified carbon dioxide to change to a gaseous form as its temperature increases which in turn is seen as the ‘fog’. In this case the change from solid to gas bypasses the ‘liquid’ stage which typically occurs with other elements or compounds, i.e. think of how water based ice would transform when heated, i.e. from a solid, to a liquid, and then to a gas. This immediate transformation of carbon dioxide – or indeed any other compound or element from solid straight to gas - is called ‘sublimation’.

The dry-ice machine adds a degree of automation and control into this process allowing an ability to control the rate of sublimation and hence the overall output or volume of fog.

Due to the very low temperatures of the dry ice, even very brief contact with skin can cause burns, hence the equipment may need to be treated as hazardous depending on venue or other regulations or requirements

Heavy fog machines are arguably the modern alternatives to classic dry-ice machines, albeit arguably in many cases not quite as effective.

They are in essence a smoke machine (see below) with a ‘chiller’ box immediately after the output nozzle of the machine. The chiller box – usually filled with simple ice cubes – rapidly cools the smoke being produced without dramatically affecting the humidity of the smoke, and consequently causes the smoke, now reduced in temperature, to ‘sink’ to the bottom of the room in which it is being used (subject to there being an adequate differential between the room temperature and the room air temperature).