Miking a Live Band or Performance

Check out our range of hire options for PA, portable PA, mics, lighting and rigging.

Contact us via this webform or on (02) 9477 3757 for a friendly discussion around your sound, light and A/V requirements.

Tips and tricks for miking live music performances, avoiding feedback and getting the best sound quality from your performance

Most bands that have performed live on more than a handful of occasions will know the basics of miking up, however this means that you may well have encountered one of the more frequently occurring issues of any amplified performance; low-levels, indistinct sound, or the dreaded feedback!

We want you to get the best out of your performance, especially when hiring our PA, mics, DIs, effects, EQs or compressors, so have prepared this guide to miking up to ensure you have the best chance of achieving a great sound, whatever your combination of instruments, and whatever the venue.

You’re probably aware that there are different types of mic, but it’s all too easy to use the wrong – or at least not effective - mic type or model, or to assume that a general-purpose mic will be good enough to use across vocals and any type of instrument.

Making that assumption will however at best lead to poor quality of sound, and often will result in many more problems such as unwanted feedback, inappropriate dynamic range for the instrument or singer etc.

As a starting point, choose a reliable mid-range cardioid vocal mic such as a Shure SM58, Sennheiser E835 or similar. (Click to heck out or microphone hire options).

These mics are specifically designed and tuned to perform at their best in the usual vocal range and have a ‘presence peak’ which helps vocals to cut through the mix with maximum clarity.

Tip 2 - Mic up as close to the source as possible

This sounds obvious, but we’re often amazed that even regular musicians or vocalists forget that one of the best ways of ensuring good output, rejection of feedback and the best gain is to mic up as close to the instrument or vocalist as practical.

Foldback - sometimes known also as wedge or stage monitors - has to compete with all of the on-stage (also known as backline) sources including guitar amps and drums, and the stage environment can often be exceptionally loud. Drummers alone are often the cause of >50% of on-stage noise.

What this means is that foldback output is often at very high levels, and unless positioned and EQ'd very carefully, foldback can add to to the likelihood of on-stage or front of house feedback. At the other extreme, with foldback wrongly set-up, with 'muddy' output, or with levels just too low, and  you're simply not going to be able to hear yourself.

Perhaps the biggest and most easy to implement hint we can offer here is to keep your foldback directly behind and on-axis with the relevant mic.

This is of course going to be more difficult for drum fills, but if you are using drum monitors, again think about positioning and axis and don't be afraid to raise the monitor to an appropriate level which in turn can assist with reducing monitor volumes.

In the industry the process of 'ringing out the monitors' is also still widely adopted. This is simply the process of increasing the level of the monitor until it starts to feedback. The feedback frequency is then identified (using an analyser or 'by ear') and then EQd out. The process is then repeated. Once the first few frequencies have been removed with EQ, this can often be enough to adequately reduce the feedback risk.

Getting decent foldback levels without risking feedback is one of the biggest challenges faced by audio engineers, so one other tip we can offer is to go easy on your audio engineer if feedback is encountered. Unless you are at a very large event, your engineer is often trying to balance both front of house and stage foldback at the same time, and often trying to meet the differing needs of 4-5 performers and hundreds of people in the audience at the same time. Which leads us to the next tip...

Tip 4 - Make time for a soundcheck!

So this is possibility one of the easiest tips to implement, but one that is the most often skipped by groups just starting out.

Every venue is different requiring different output levels, EQ, and overall  audio tuning. In fact the same venue can behave differently [from an audio perspective] at different times of day due to changes in temperature, humidity, ambient noise, electrical circuit noise, interference from fluorescent lighting and countless other factors.

The best way therefore to achieve great front of house and on stage audio is through a thorough soundcheck. Not only will this ensure that the band sounds great to the audience, but also that the individual band members can hear themselves at the right levels through their foldback.

The soundcheck also gives the engineer an opportunity to set EQs, compressors, limiters and the like for the greatest chance of avoiding performance-killing feedback.

Aim to arrive at least an hour before the gig for a decent sound check! 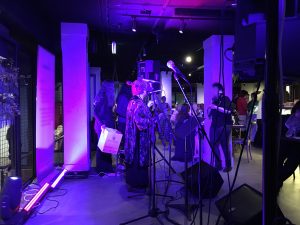 Another obvious point is to make sure your vocalists really know how to use a mic. You’d be surprised at how many amateur vocalists have never been given any advice in mic use or handling!

A great starting point here is to always aim – at least when using unidirectional cardioid type dynamic mics - for the vocalist(s) to be singing into the top of the mics, not the side.

To enable some consistency here, if using mic stands, ensure that the stand height is correctly set for each performer, to allow the top of the mic to be on axis with the vocalists’ mouth, or if holding the mic, ensure the top of the mic is aimed toward the mouth as much as possible.

The first lesson here, is that there is no ‘one size fits all’ approach to miking instruments, and there is often no substitute for experience or indeed having a range of mics, cables, stands, clips and mounts on-hand that can be adapted for different stage set-ups, instruments and conditions.

That said, there are some good general guides that will apply for different instruments, and we explore some of the best options for the most popular instruments here.

We often see acoustic guitars miked up with a mic directly facing the sound hole. Whilst that might get you some reasonable sound levels, it’ll often result in ‘muddy’ sound output as it doesn’t allow the full frequency range of the instrument to be captured.

As a starting point, we would recommend having a mic set up to point approximately half way between the sound hole and the 12th fret of the guitar neck. This tends to be the ‘sweet spot’ for most acoustic guitars. Aim to have the mic around 12” / 30cm away from the neck.

Better still, consider setting up two mics in an ‘X-Y’ position, i.e. one focused on the sweet-spot, and one closer to the bridge. The immediate benefit of this is that you will also get a stereo output, but also this brings the benefit of being able to pick up a wider frequency range.

The most usual way of miking an electric guitar is with a mic facing slightly angled toward the edge of the speaker cone in the amp cabinet.

Don’t be tempted to aim the mic at the centre of the speaker cone as this can result in a limited frequency range being picked up which in turn can muddy your sound.

There's almost a universal truth about drums and drummers - they're usually the loudest instrument on the stage (prior to instrument amplification) so depending on the bands viewpoint, the desired overall levels, and the time on-hand, miking the drum-kit is often overlooked, or considered only as an after-thought based on the common thinking that 'the drums will be loud enough'.

So let's start with that last point, the 'drums will be loud enough'. Well often when considering pure volume levels, this will be the case, but not everything is equal with a kit and every kit is different.

The kick and the snare may have plenty of punch for most small events, but we often hear the hi-hat, smaller toms, and sometimes even the ride cymbal get lost in the overall mix.

Another element to consider is the 'width' (or better put spatialness, openness or dynamic nature) of the drums in the front of house mix.

Creating that sense of width can often be achieved with a couple of overhead condenser mics / pencil mics and then some extra 'width' added to the mix via simple pan / balance adjustments.

So what about for larger gigs where a full miking is probably necessary, or at least beneficial?

More instrument types will soon be added – bookmark this page and check back regularly!